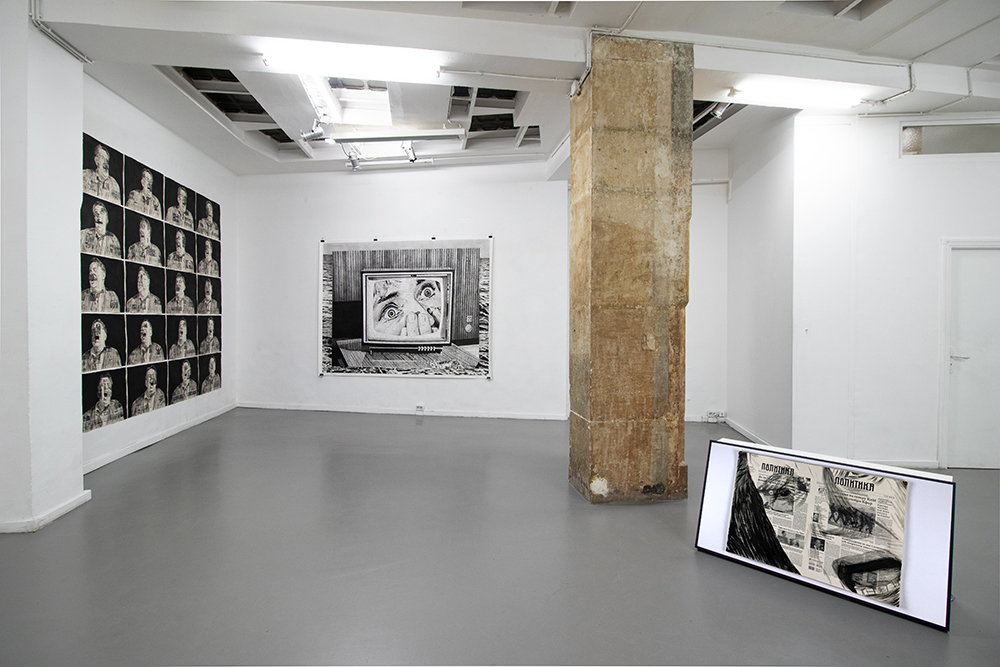 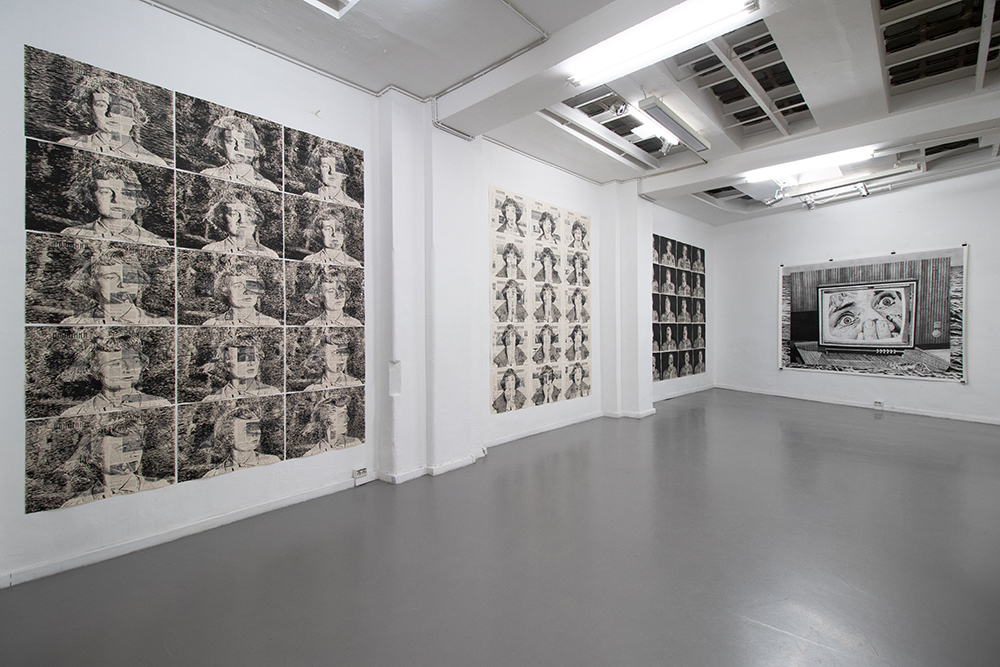 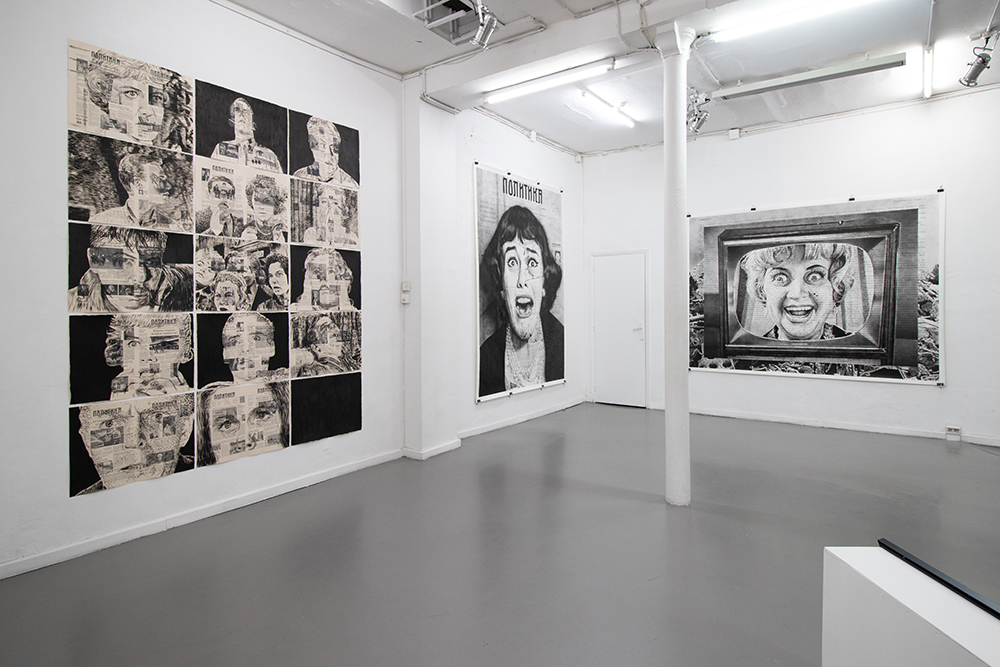 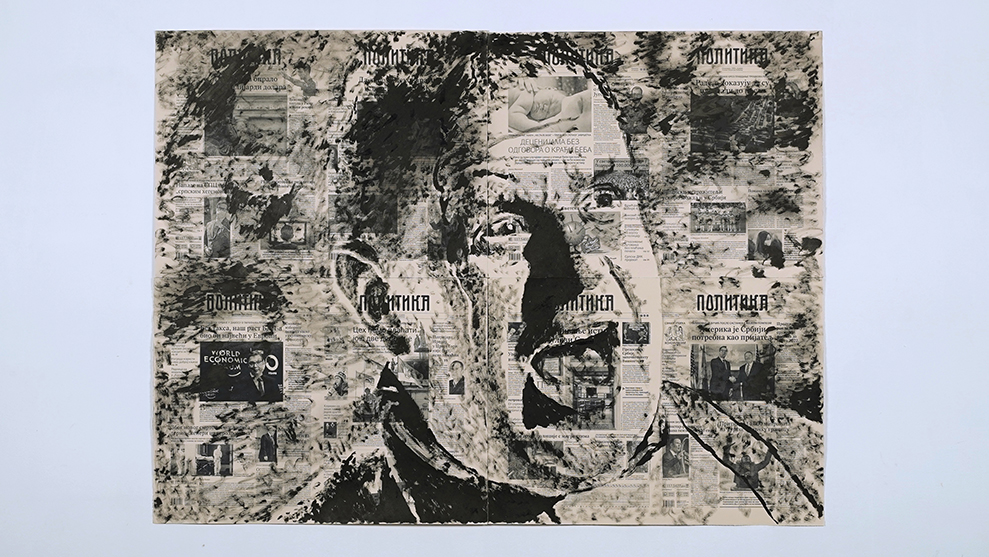 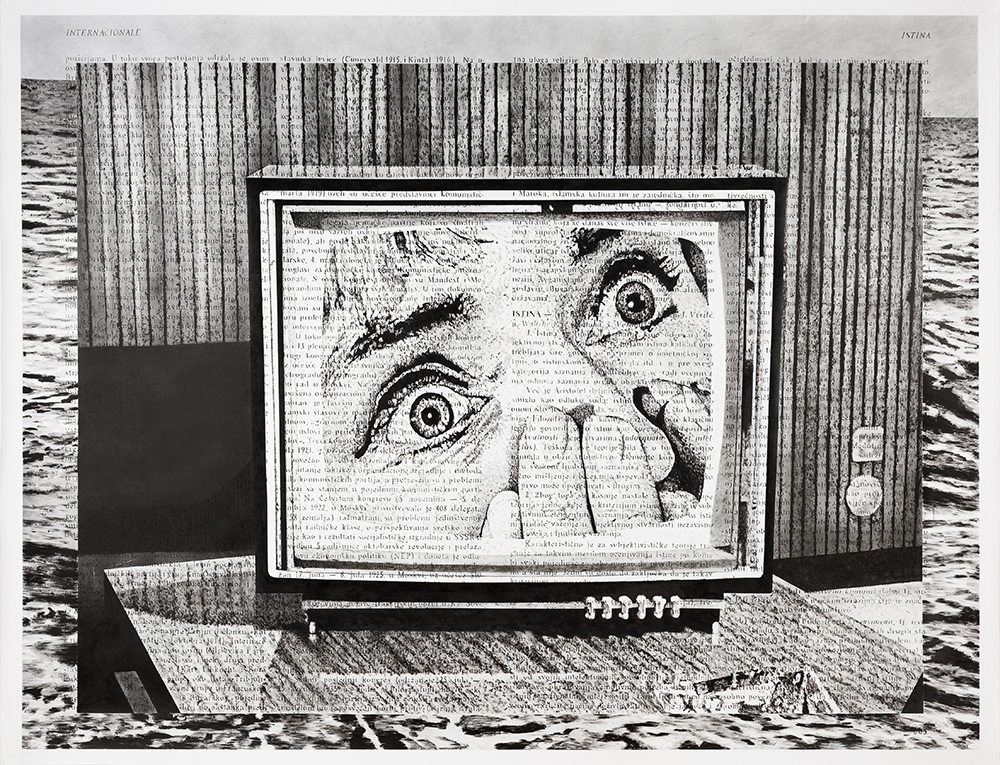 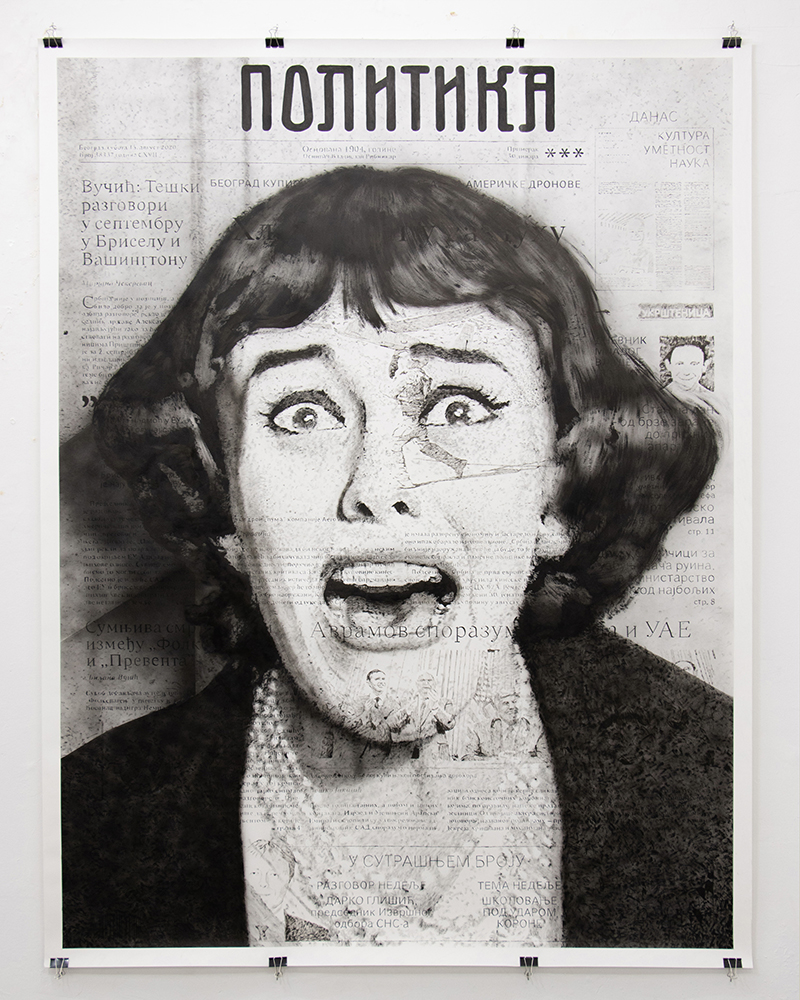 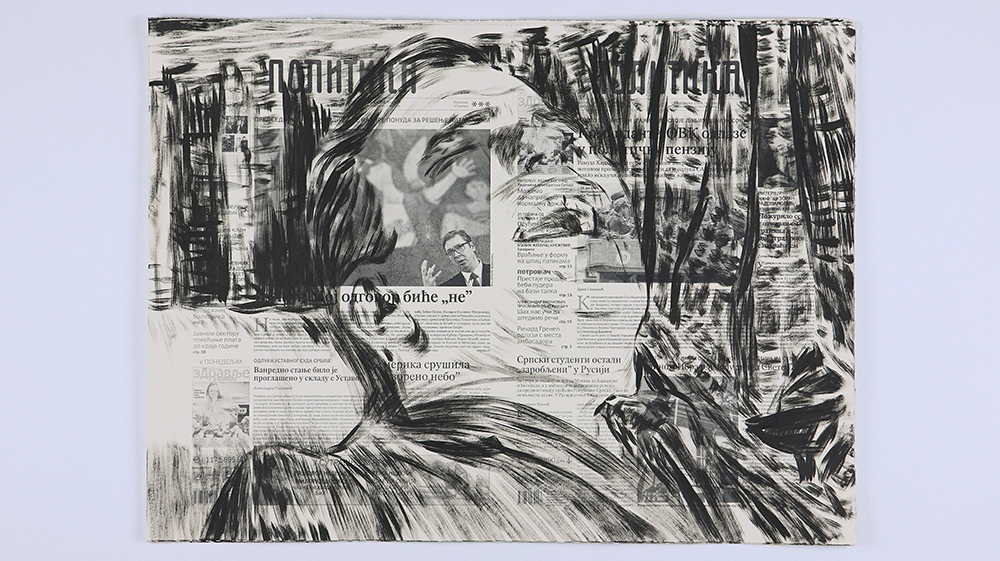 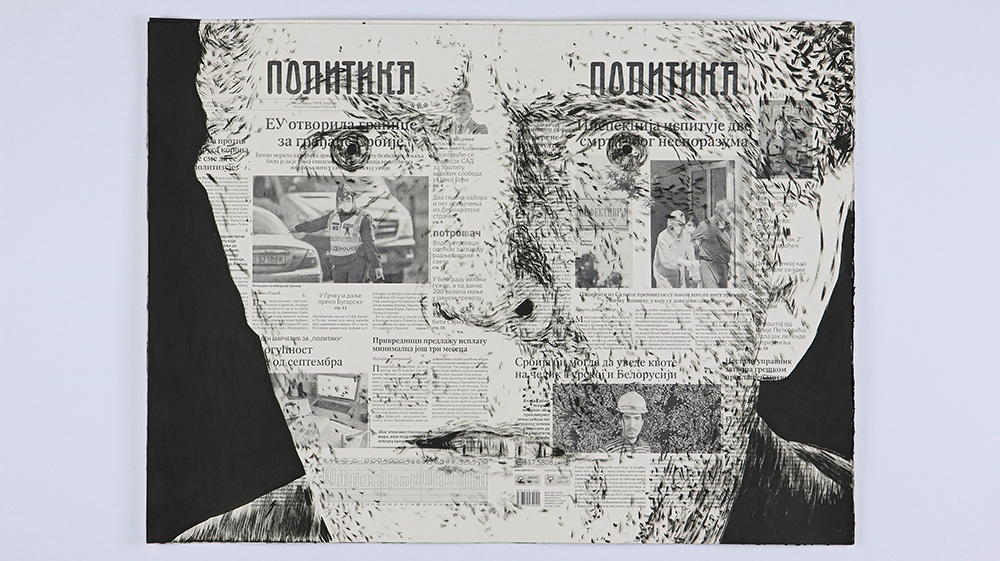 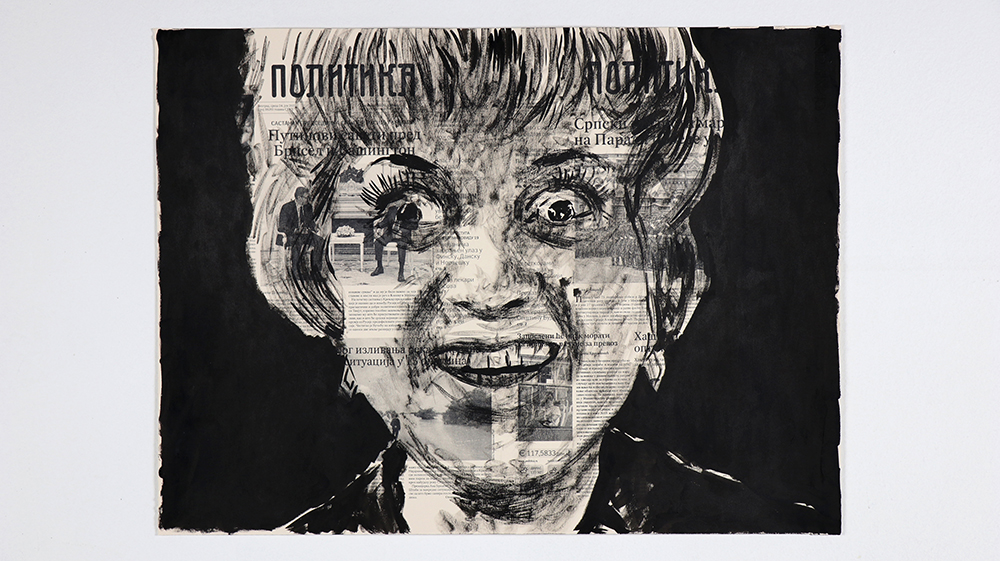 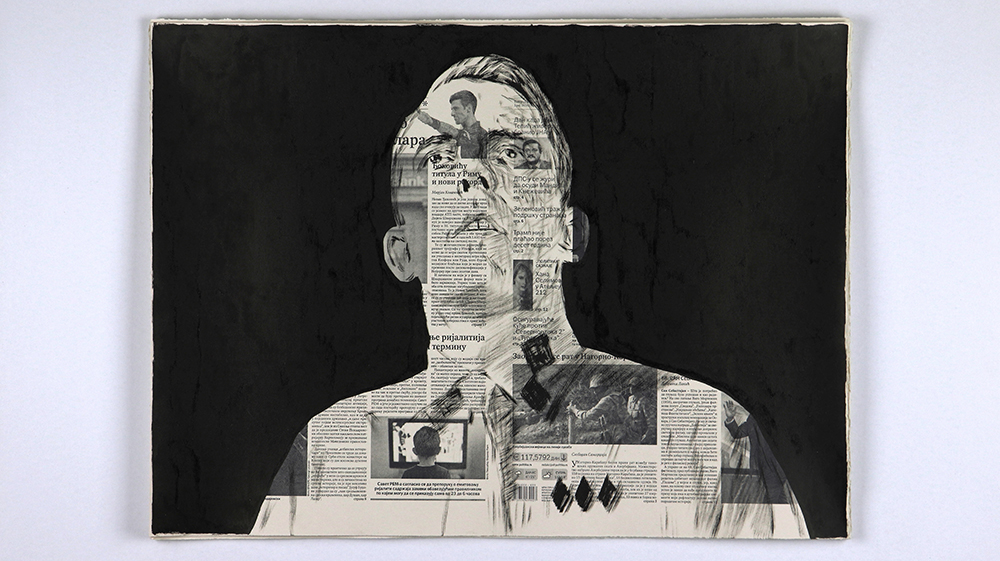 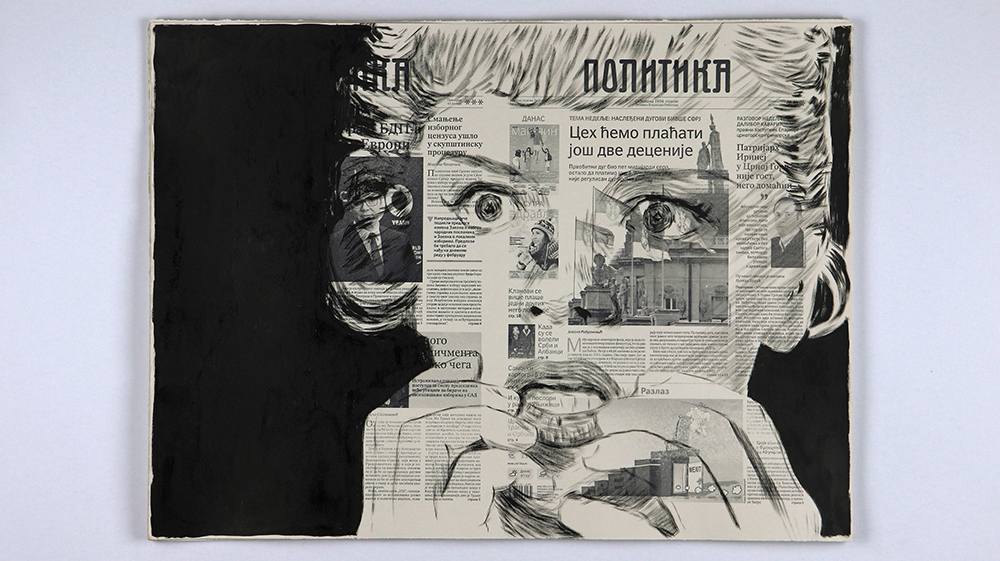 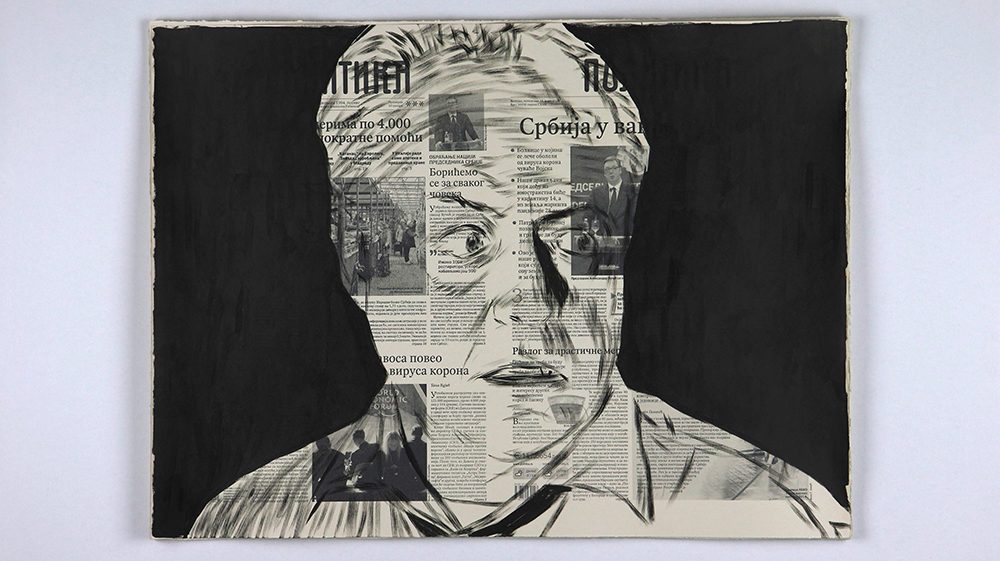 For his fourth exhibition at Galerie Dix9, Nemanja Nikolic presents "Psychopolitics", an animation film made of drawings. Following a same conceptual approach of the moving image, linking the language of visual arts and film, where the film is always the starting point of the author to define the space of the motif, this project is a new stage of a work that the Serbian artist pursues since his project "Panic Book", acclaimed everywhere. But here the artist adopts a more critical approach facing the actual society.

October 2, 1959 on a black TV screen where appear some stars, we hear this sentence: "There is a fifth dimension, beyond that which is known to man. It is a dimension as vast as space and as timeless as infinity. It is the middle ground between light and shadow, between science and superstition, and it lies between the pit of man's fears and the summit of his knowledge".
That was the intro of the TV series "The Twilight Zone".

The 500 drawings of the animated film are inspired by this fantastic cult series titled  "the Twilight Zone" from 1954 to 1964. They are made on the first pages of the Serbian daily newspaper "Politika", all dated 2020. By selecting close-ups of these sequences, Nikolic shows us actors in a state of confusion and panic. Images of frightened faces alternate with those of cries against a background of news, false or true, likely to capture the attention by alarming the opinion.

Analyse by  Sanda Kalebic, art historian
In his new series of works, Nemanja Nikolic continues the practice of superpositioning drawn scenes from movie classics, that he makes into video animations, on different printed editions. Nemanja's interest in the filmography of the mid-20th century and scenes full of tension and uncertainty, which he appropriated in his previous works, naturally continues here, where he turns to Rod Serling and scenes from the American TV series "The Twilight Zone". This famous series, which aired in the late 1950s and early 1960s, achieved cult status thanks to its dramatic sci-fi and horror narratives with intelligent and moralizing messages. Unlike his previous works, in which Nikolic used old Yugoslav publications with socialist themes as a background for animations, in the series "Psychopolitics" he turns to the front pages of the Serbian daily newspaper "Politika" issued in 2020. Given that the basic and most apparent key to reading Nemanja's works lies in the relation between the background and the drawings, here he makes a step towards a more direct questioning of the specific present-day moment, which for the first time gives his work a clearly apprehensible activist tone.

"Politika" is the longest running daily newspaper in Serbia. As such, it has built a reputation as a recognizable media brand and for many of its citizens, it is considered a symbol of traditional non-sensationalist journalism. "Politika" is truly one of the few dailies in Serbia that does not contain flashy pages, aggressive typography and dramatic "news" about the imminent start of the Third World War, which are located right next to the latest crime and show business gossip reports. However, although wrapped-up more decently, "Politika" is a newspaper with a long history of using its authority for the sake of more perfidious pro-government propaganda and nationalist coverage, thus joining numerous other "newspapers" that make media freedom and independent reporting in Serbia far from desirable. It is this visually restrained background that allows Nemanja to avoid the trap of making the drawings seem oversaturated, and manages to maintain visual subtlety and artistic poetics, but also to achieve a dose of irony in the contrast between the used covers in the background and the drawings in the foreground, which is necessary for reading and understanding the work.

Headlines such as those about the success and determination of the Serbian government ("A government of continuity, stability and progress", "We will be an unbreakable nut"), threats to the country's stability ("When Serbia is strong, it gets torn down in the streets", "They will try to divide our people and our church"), dramas during the corona crisis ("This is a state of war", "We need an iron discipline", "The fear of bombs has been replaced by corona"), those that determine on the direction of Serbian foreign policy ("Russia and Serbia have the same cultural code", "When it's hard " China", "Because of gratitude to China and Russia, the EU threatens Serbia") or add fuel to the already fragile regional relations ("Sarajevo government "expels" dead Serbs too", "Cold war in the air", "Albanians are waiting in lines for Serbian doctors") are unnecessarily disturbing and misinformative, or even absurd and, if one has such a sense of humour, ridiculous.

Reporting on crises, whether they are real, like the corona crisis that naturally dominated the headlines in 2020, permanent and in need actualized, like the Kosovo crisis, or simply artificially fabricated, is used on the one hand to give ruling structures more space for quick and non-transparent action, and on the other to divert attention from undesirable topics and to keep the public in a constant state of uncertainty and tension. Crises are no longer a transitional state that needs to be overcome, but become a political instrument, and with the use of the media as a tool for manipulation, reality increasingly takes on a form that would fit the genre of psychological horror.

Just like in the episodes of "The Twilight Zone" series, our reality seems more and more unbelievable, as if it is slipping away from us. Reading the front pages of newspapers, and even more by consuming other more modern media where information has become only a product and news a way to get clicks, it seems to us that we are not living in our own reality, but in some parallel world, a bad movie, the twilight zone. In the sea of information, the individual becomes unable to distinguish the truth from falseness and to cope with the amount of atrocious and absurd news. In this delusion, one can choose to stop paying attention and accept that one has no way of grappling with reality, or to invest great effort in constantly trying to unravel the world around them. Most of us end up living somewhere in between, relying on personal capacity: absorbing as much news as we can, believing in what seems believable.

Whether we consider that the dramatic news that surrounds us are true (and reality often convinces us that they can be) or that we are horrified by the fake news and spins that are spread without limit or consideration, what binds us together is confusion and helplessness. With drawings and video animation from the series "Psychopolitics", those close-ups of people who are taken aback, who are freaking out, screaming in fear and disbelief, and who are in the video, with the way and pace of changing shots, as well as the film music, which rhythmically accelerates and intensifies, perfectly dramatized and psychologized, Nemanja accurately conveys the emotional reactions and charge we feel consuming an incalculable amount of unscrupulous media content. In addition, through ?Psychopolitics? the author directly comments on our everyday life, on the state in which we find ourselves, because we will notice, apart from the agony that can be seen on the faces of the depicted characters, we also see what comes after, which is the manic laughter that, caused by the impossibility of control leads to almost paranoid states. They are what define our society, in which informative content has become just another branch of the entertainment industry, while the truth is out there - maybe in reality and maybe in the twilight zone.