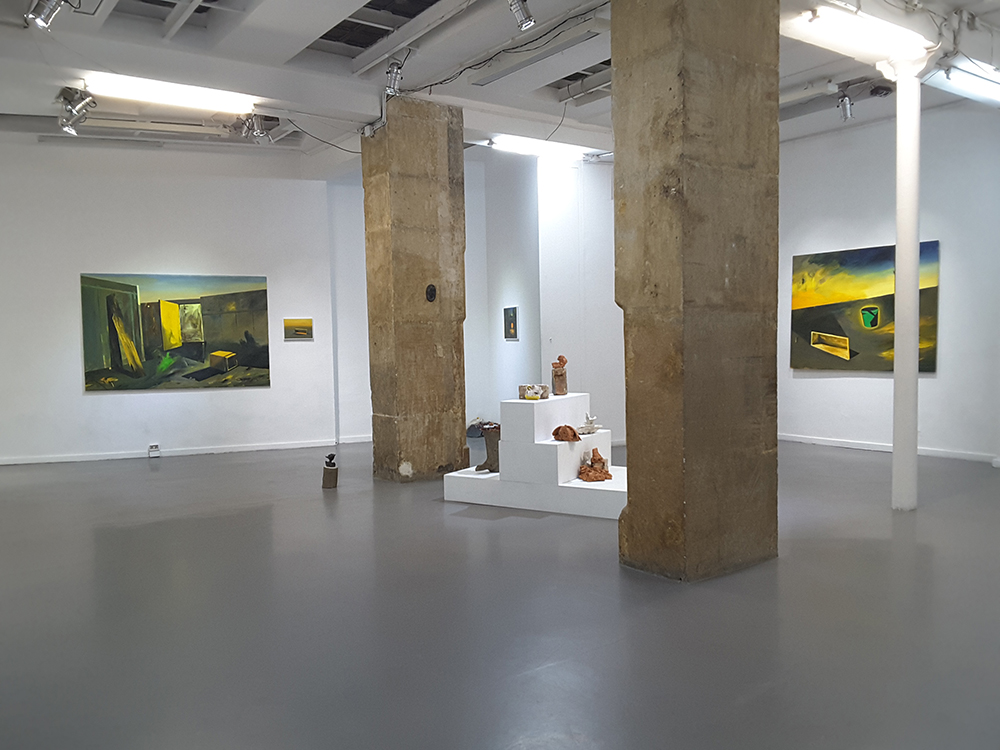 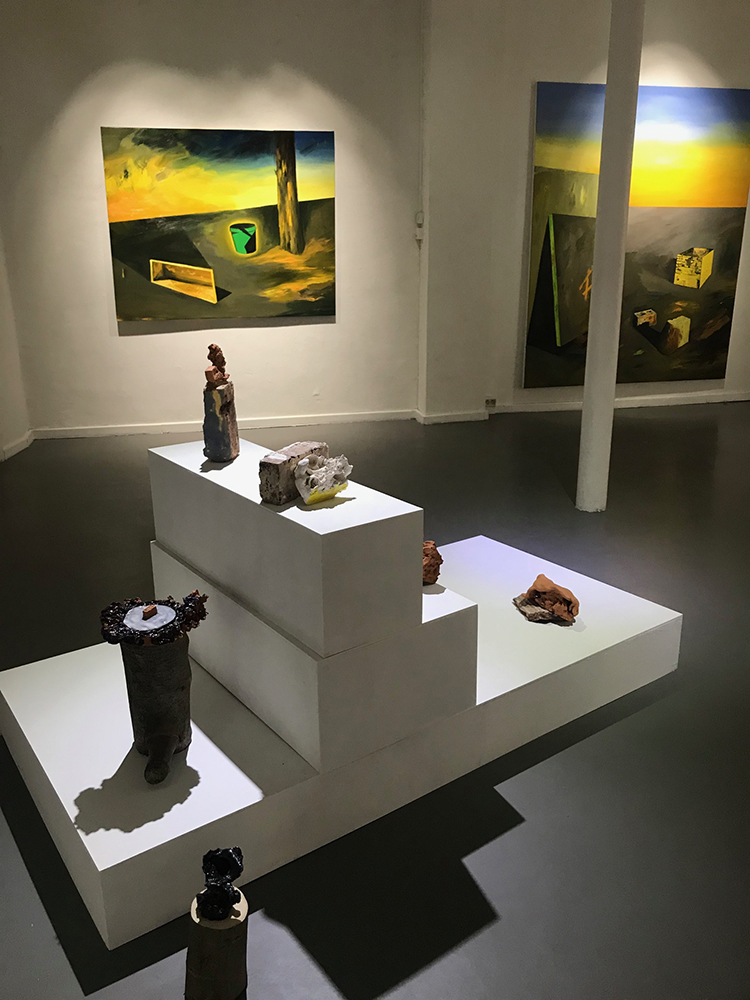 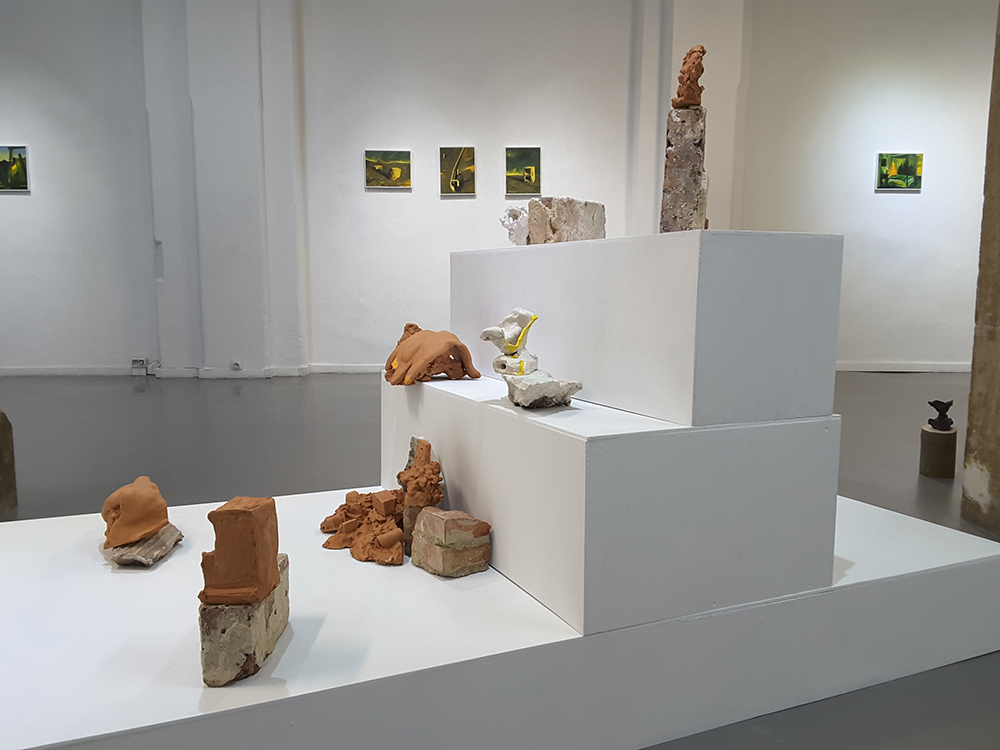 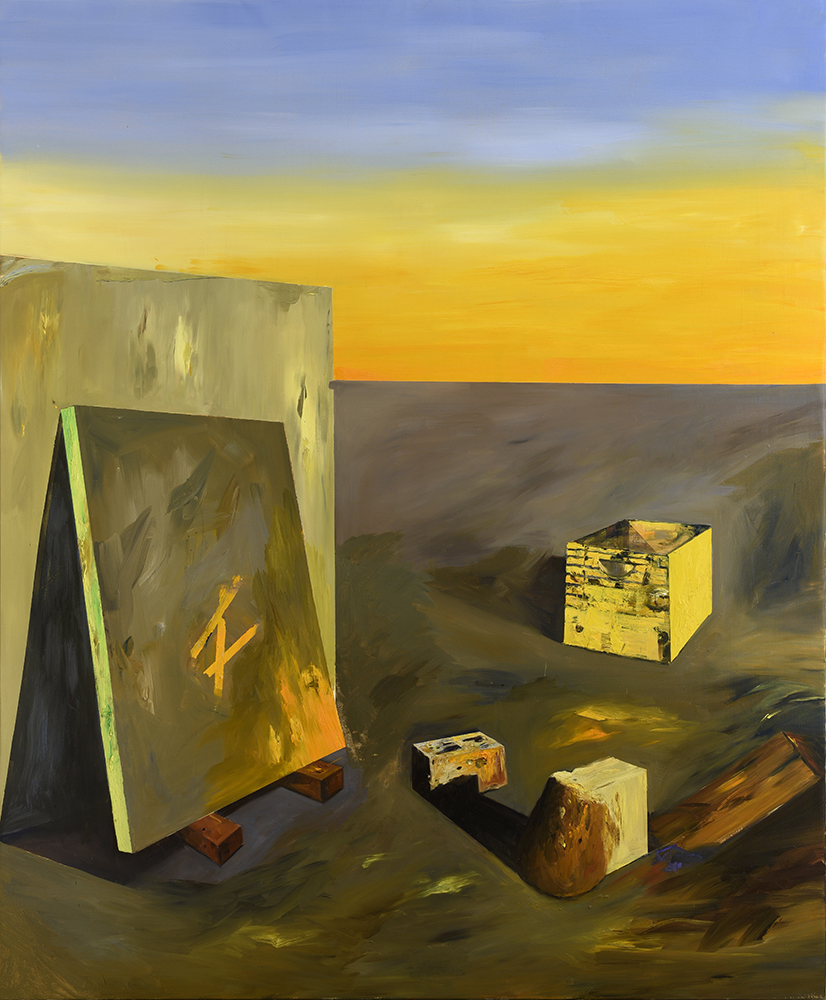 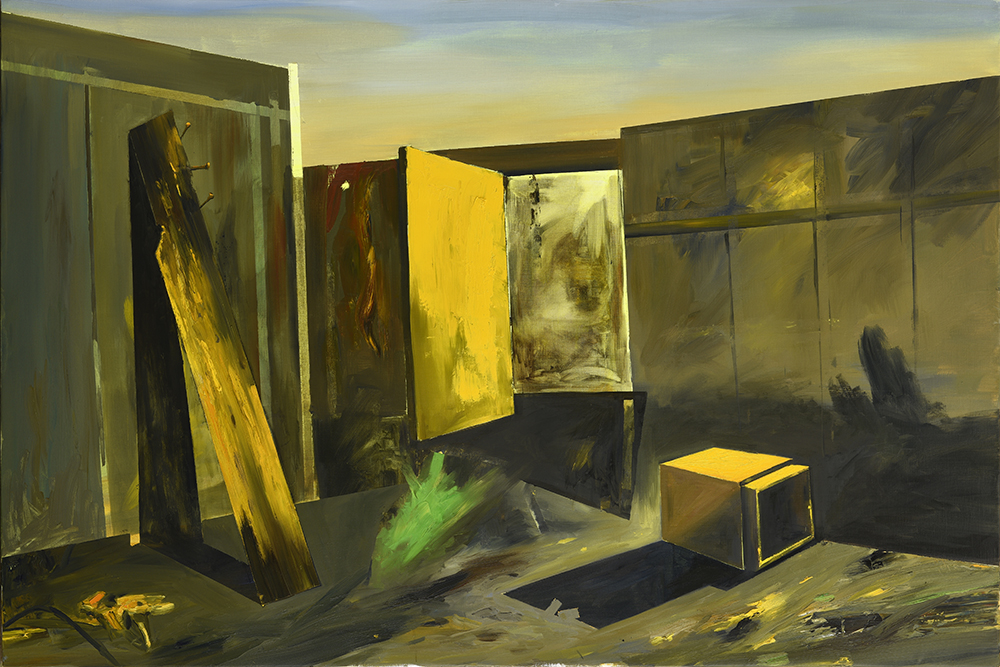 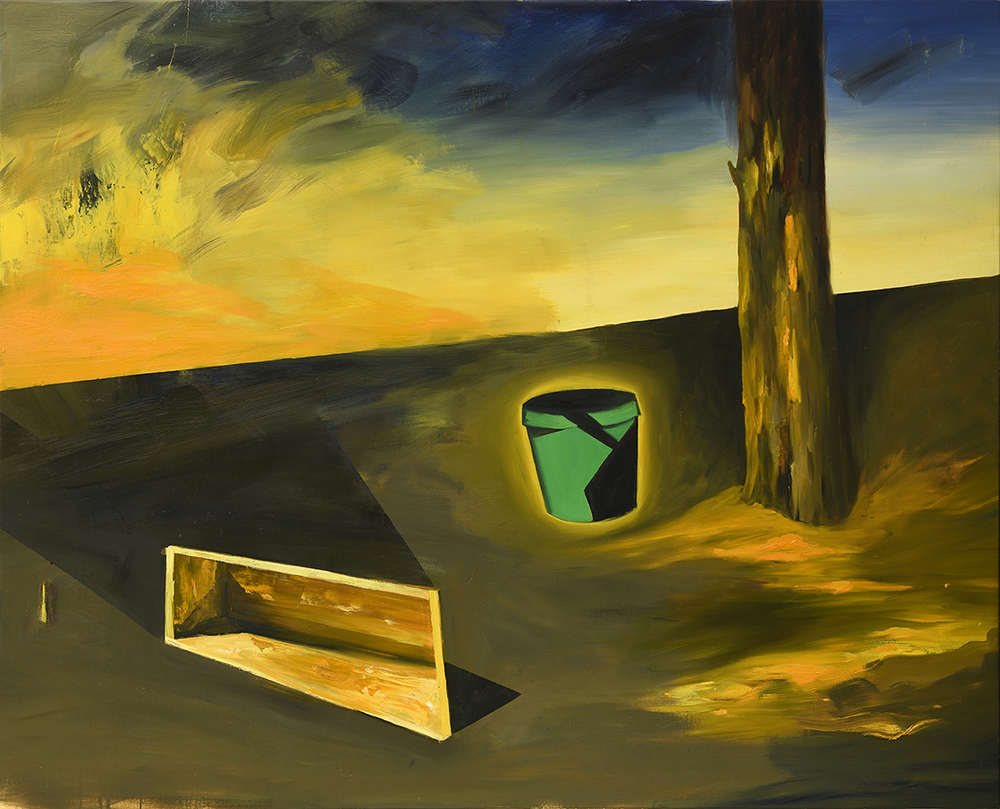 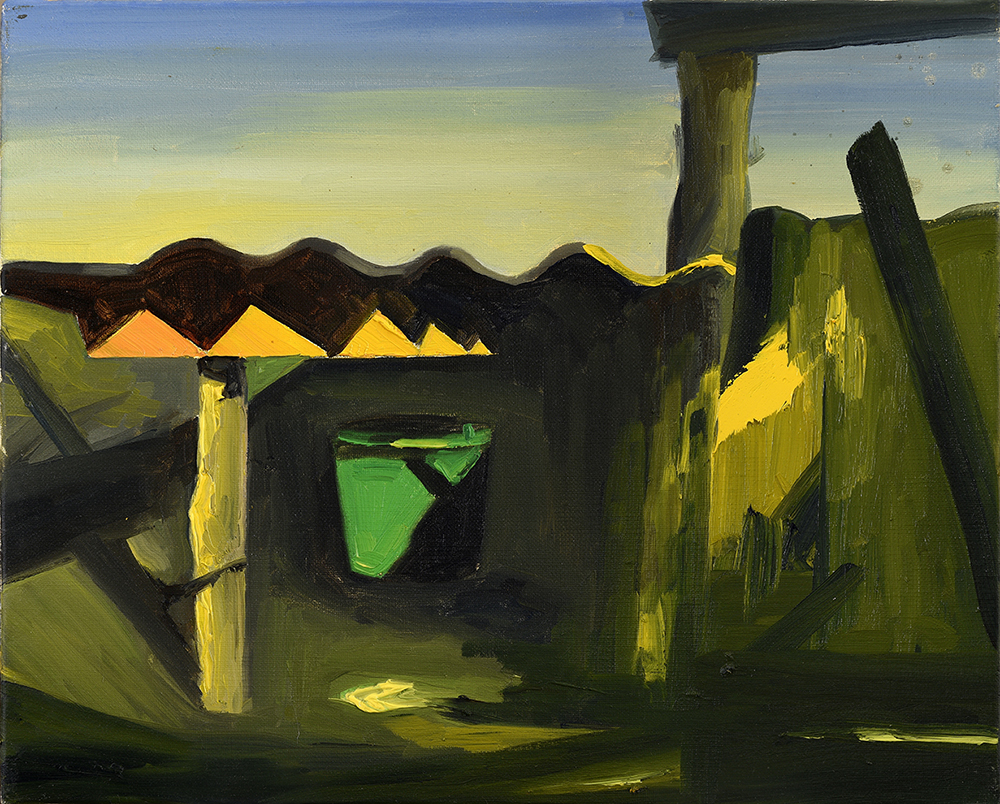 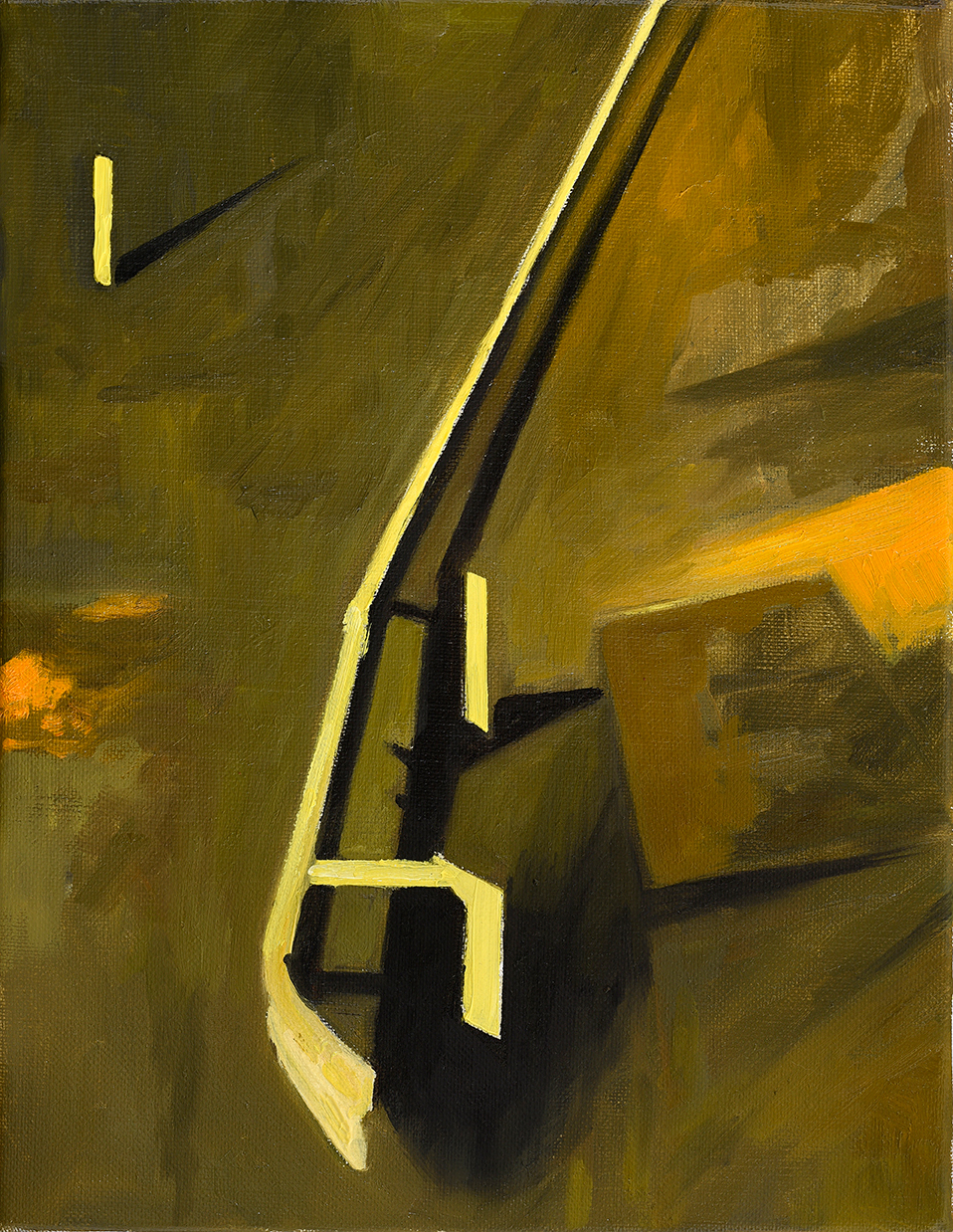 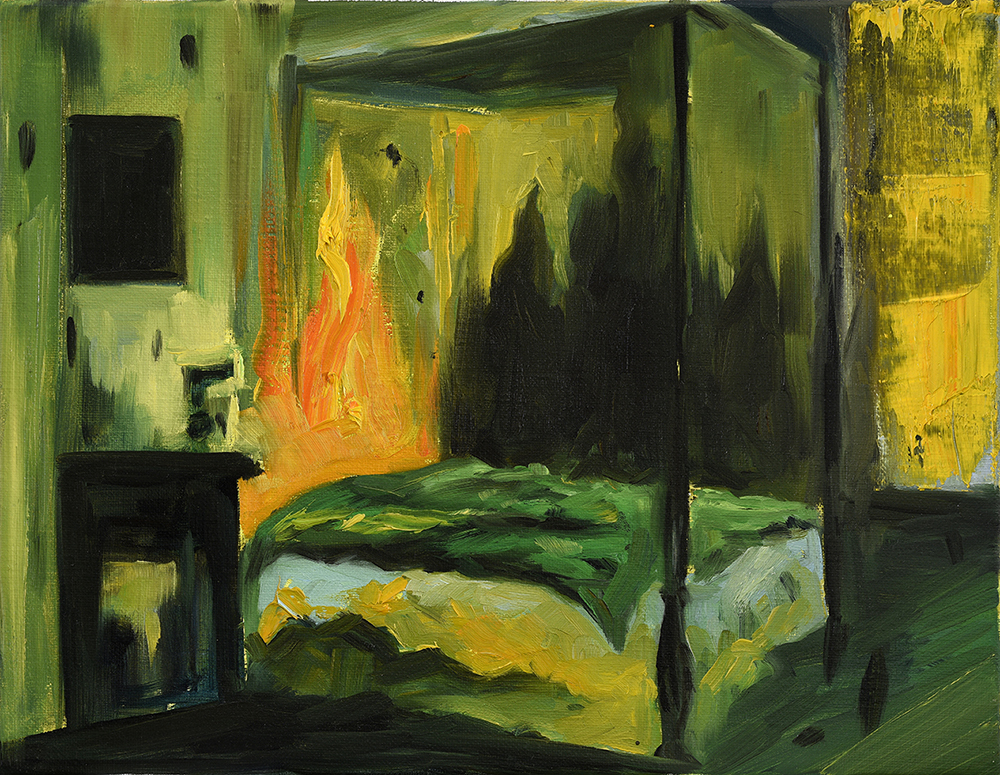 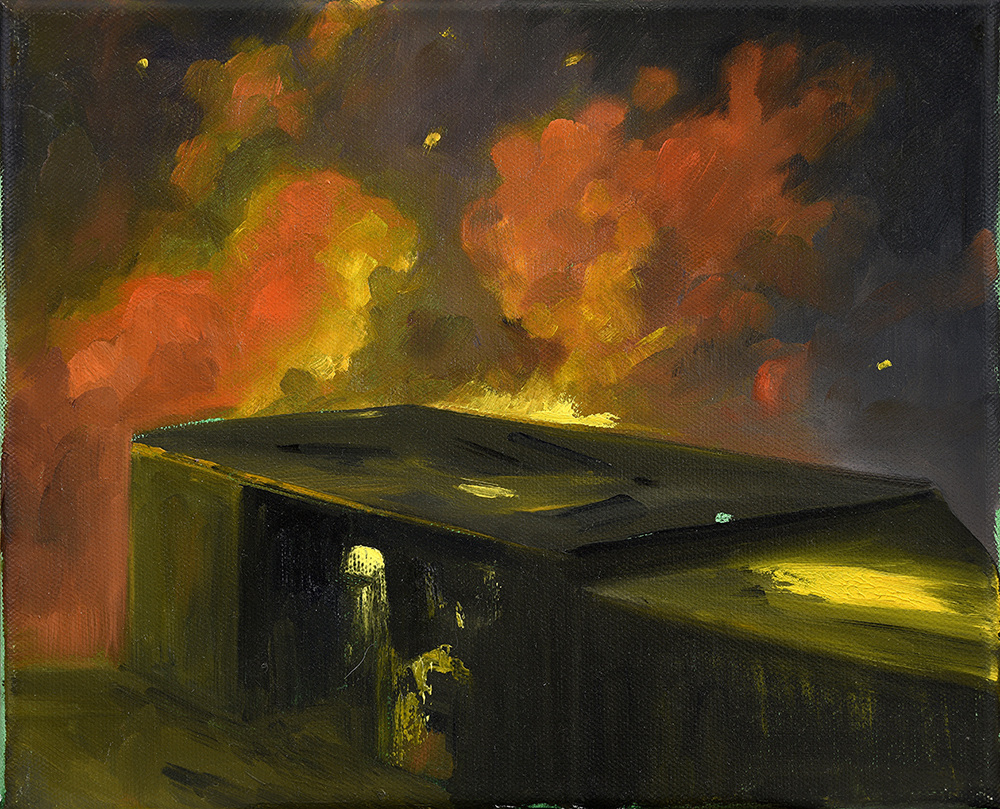 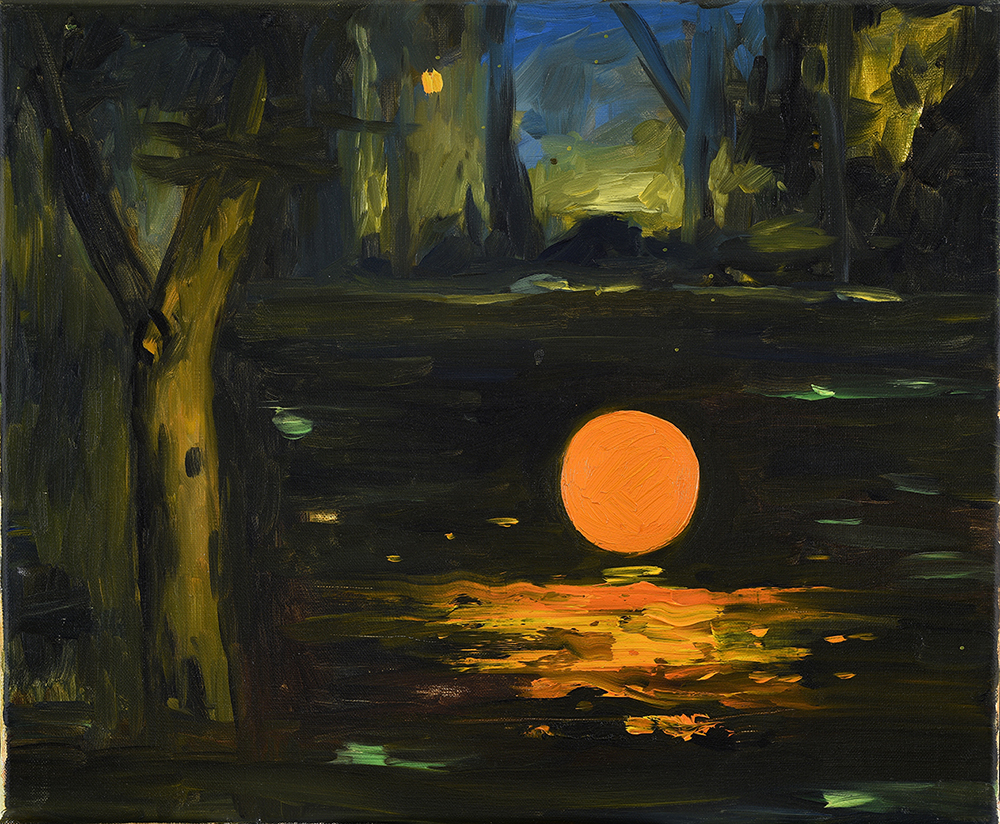 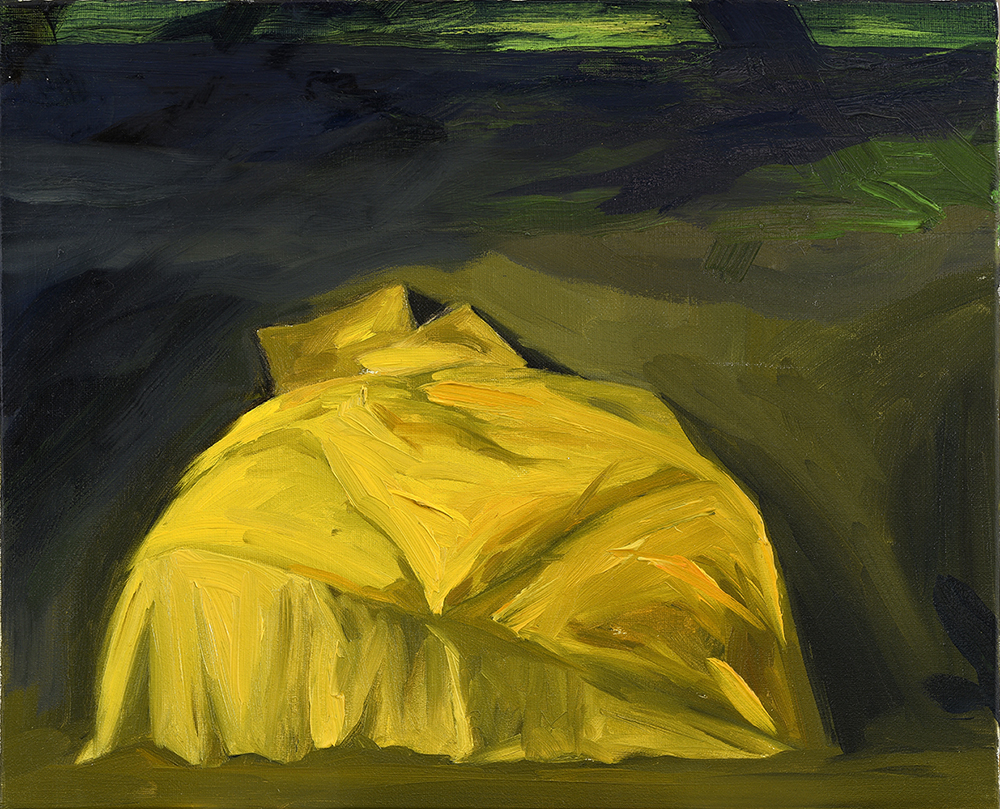 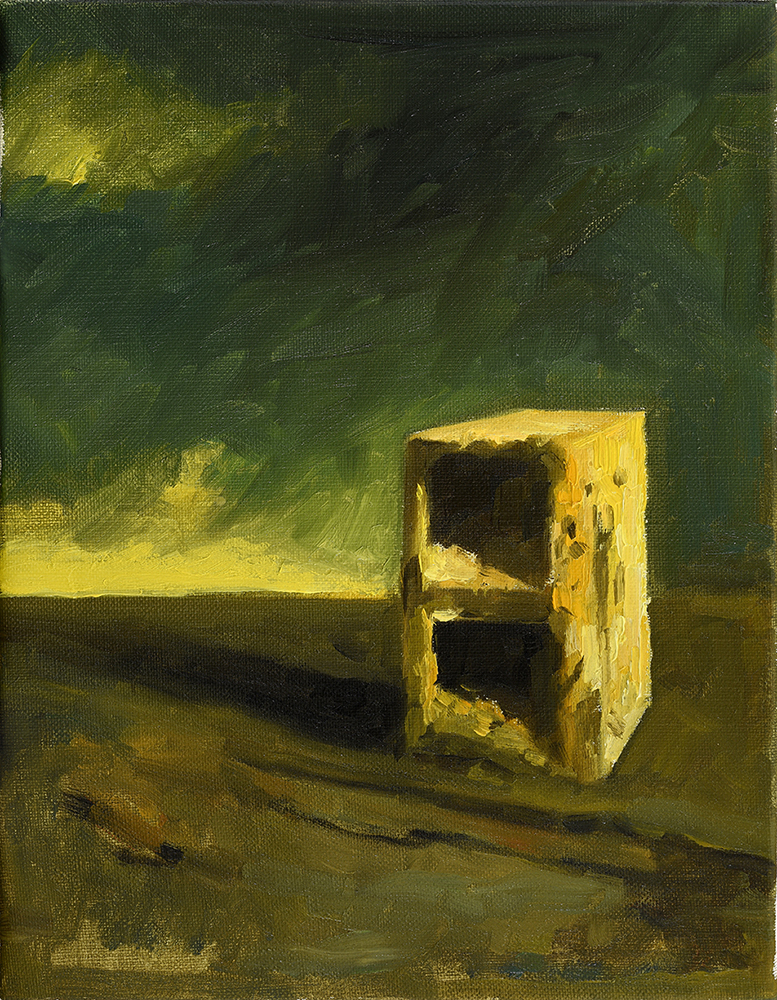 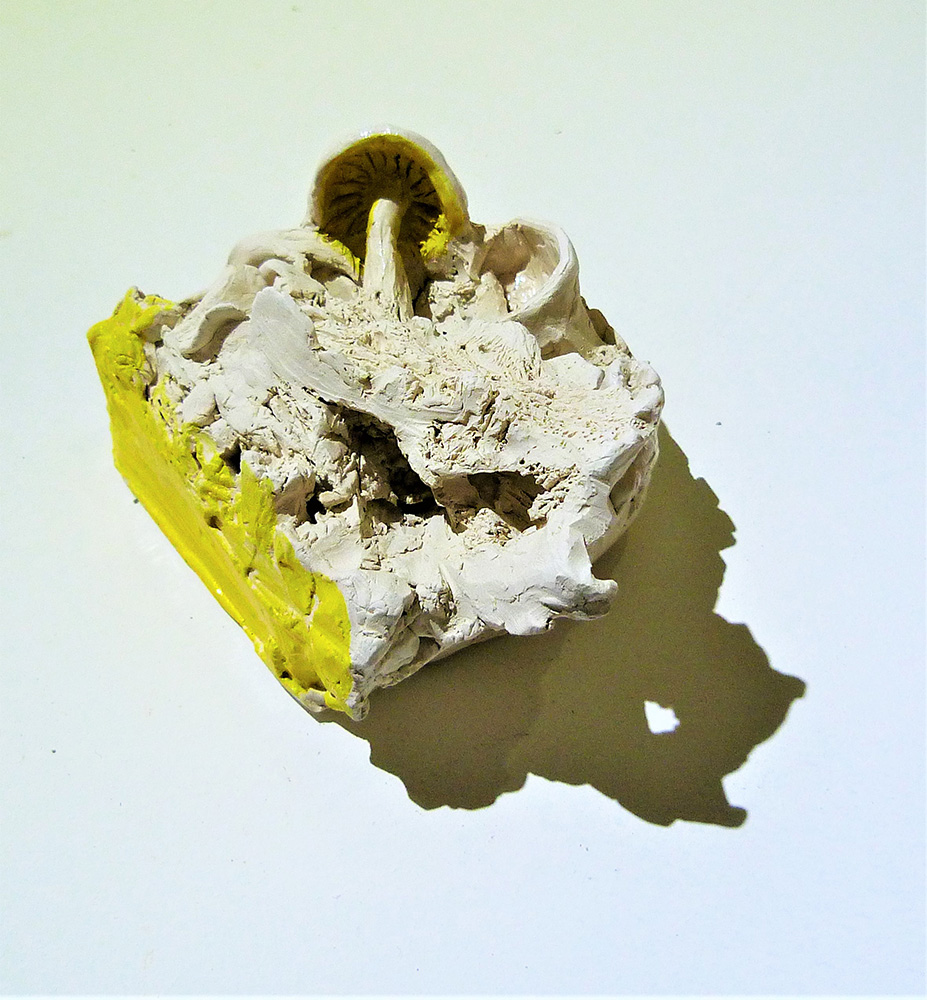 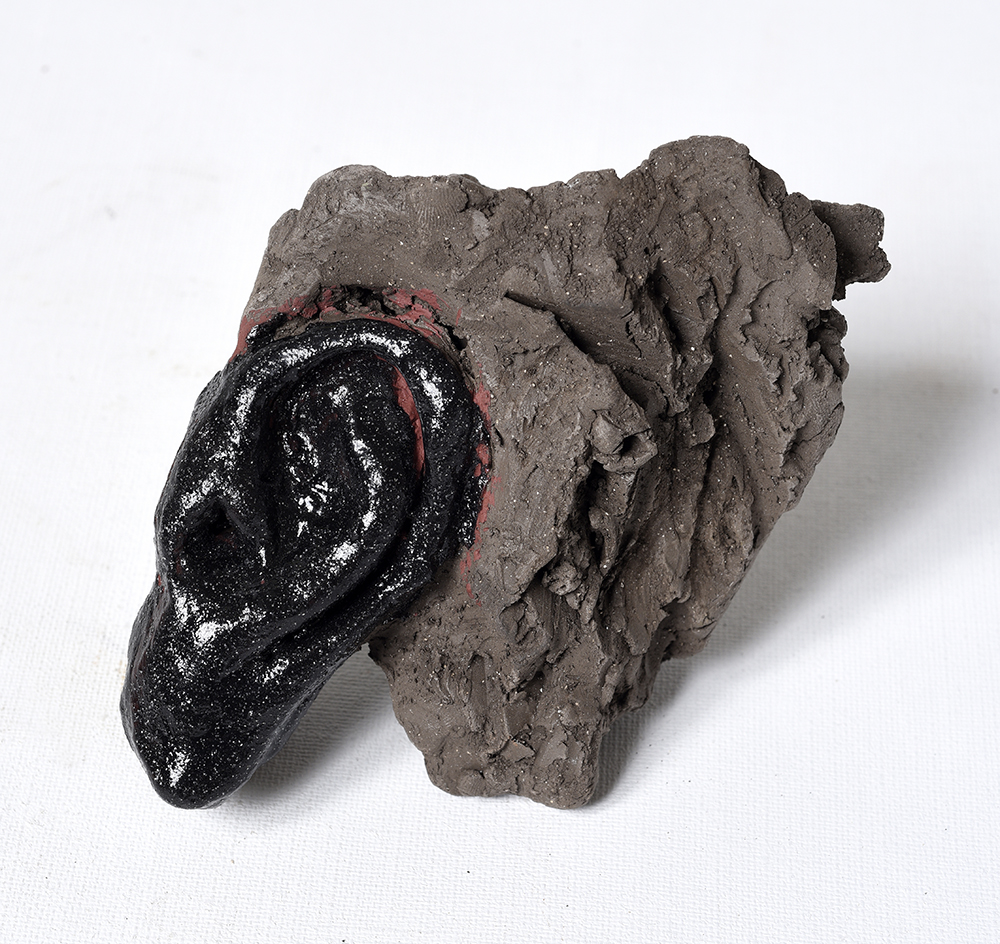 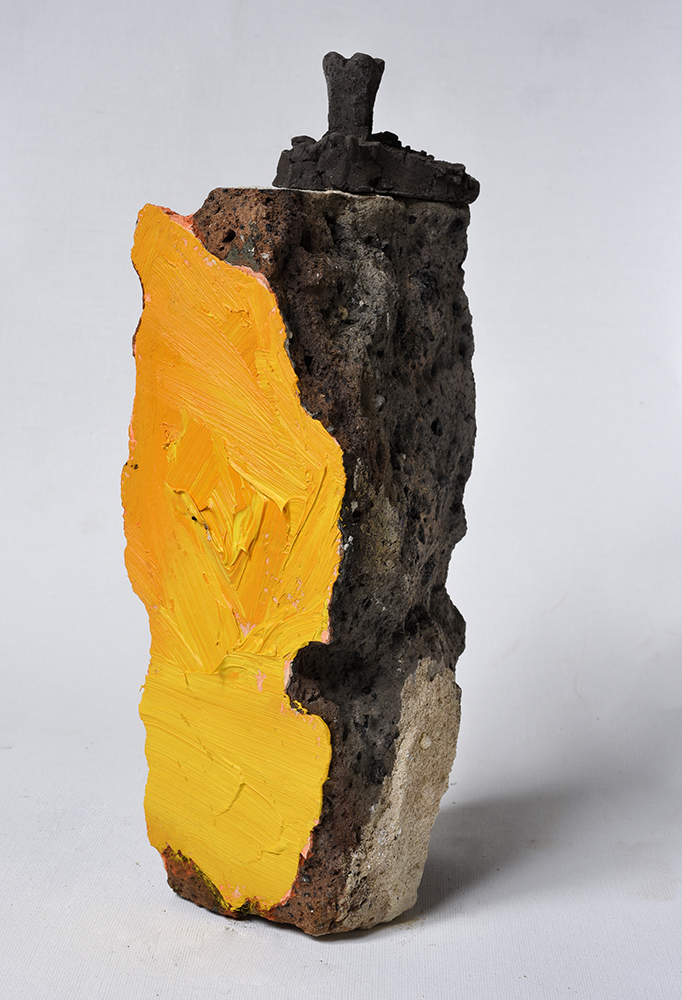 For her second solo show at Galerie Dix9, Karine Hoffman presents recent paintings as well as her new experiments in sculpture made of ceramics. Analysis by art critic Elora Weill-Engerer:

A very true creator is a stutterer. Isn’t there indeed a pleasure in the pictorial act of starting over, of approaching one’s subject without ever grasping it? “Imagine Sisyphus happy,” said Albert Camus. This form of enjoyment which cannot be achieved, this ecstatic feeling, imperfect as it is, underlies the pictorial practice of Karine Hoffman, so that implicitly, with her, the work is, in part, blind… an eminently romantic theme: close the physical eye to open the sensitive eye. From then on to draw from the depths of consciousness a visual panoply that creation will hoist to the surface. Thus it is also an epiphanic painting that offers nothing to read, or even, somewhere, nothing to see; it feels, almost touches itself, in an invitation to a haptic relationship and a fusion to its matter. Scratched at the stem, smoothed with a knife, rubbed, rugged, it transcribes a range of phenomena (soft or hard, built or vaporous…) that embrace the gaze like a bewitching spectacle; a Heraclitean painting,inexhaustible therefore, which escapes itself.

Karine Hoffman’s paintings display a disturbing atmosphere of nightly fires and a lantern-lit forest decor. With chiaroscuro illuminated by false suns and Greek fires, these can only be perceived through the screen of sfumato. The access is veiled, the image hermetic. It is a painting of absence, which approaches memories of memories without bothering with the least bit of logic. Note for example the cohabitation of opposite shadows and multiple suns within a polyfocal pattern. In
other words, it is an enterprise of subversion of a built-up and composed space in which a disruptive element intrudes. Mephitic antechambers, posttraumatic
places that still crackle after the storm, these depopulated places give life to the painting without detouring from the subject. The more the painting is «empty» of any subject, the more it mediates this quasi-mystical experience. The void is indeed the place where the pre-visible communicates with the invisible, where the
opacification of the pictorial medium is a plastic means of evoking an infinite space that continues beyond the canvas, keeping the narrative open.

In a similar way, Karine Hoffman’s chemical shades are not so much colors as they are dynamic elements that come out of the picture; light-yellow, fluid-green, earth-grey, heliotrope-orange infuse this ecliptic painting with their movement. Here is
the dynamism found in ceramics, solid fragments extracted from the paint of which they are the slag. These works of volume are very clearly situated in direct continuity of the two dimensional work: ones, like the others, are designed to be put on view and to respond to each other, forming a loop.  Together with the plastic lexicon, the same confrontation of materials is identified: the mat and the brilliant, the crude and the enameled, the fired and the raw coexist in these
ceramics assembled in scrap gleaned from the real (bricks, trunks of wood, fallen debris…) Objects in gestation, objects witnesses of their ruin, they accuse a thought on the way in a non finito that twists reality.

Bed, glove, bucket, box, mushroom, wall, board: the few banal objects depicted throughout the work are paradoxically abstracts of their role in a generic way,
derogating from their use to become the symptoms of an insoluble equation. In the midst of chaos, the obvious presence of these objects cannot escape the gaze as no being escapes itself. “What appears in shame, then, is precisely the fact of being riveted to oneself, the radical impossibility of fleeing in order to hide from oneself, the irreparable presence of the self in oneself. Nudity is shameful when it is the patency of our being, of its ultimate intimacy,” wrote Emmanuel Levinas in "De l’evasion", 1982. It is strange and human to strip these isolated objects that seem to witness the event. These alone index the strict cleavage between abstraction and
figuration. The impulse is moved in the interstitial space between these two poles. What traditionally happens in the background of painting is therefore here the field of exploration of the artist, her initiatory crossing in this world being made."

Per espera ad astra.
Through hardships to stars.